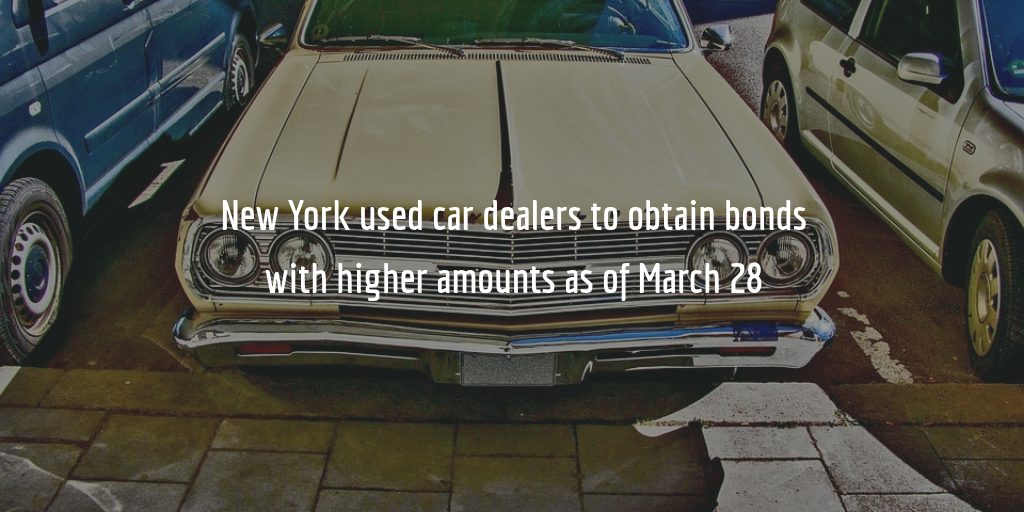 New York used car dealers should remember that they will have to obtain bonds with higher amounts starting March 28, 2017. This change was implemented with the passing of New York Assembly Bill 8166 on September 29, 2016.

Read the full details of the new requirements, and when and how to obtain your New York auto dealer bond!

Starting March 28, 2017 NY used car dealers will be required to post a surety bond with higher amounts when applying for a new license or renewing their current license. Up until now, bond amounts for used car dealers in the state were:

Bill 8166 changes both the amounts of the bonds as well as reduces the amounts of vehicles sold that require one or the other type of New York auto dealer bond. As of March 28, applicants for a NY car dealer license will need to obtain the following types of bonds:

The Bill does not require car dealers who already have surety bonds in place to increase their amounts as soon as the legislation enters into force. Instead, used car dealers will be expected to obtain a bond in the new amounts when they renew, replace, alter or extend their current surety bond.

So what about the cost of such bonds? How much will used car dealers have to pay for a new bond?

The cost of your surety bond is a percentage of the total amount of the bond. That percentage, or rate, is determined by the surety bond company which issues your bond.

The process goes like this: when applying for an auto dealer bond at a surety bond agency, you will be asked to provide financial details, such as your personal credit score and maybe some financial statements, proof of assets and more.

What the increase means for dealers

The increase in used car dealer bond amounts will also increase bond cost for dealers. This has been a source of criticism towards the state of New York as it will be putting smaller car dealers in a difficult situation.

Typically bond increases of such a level are not made without scrutiny on behalf of legislators. A common reason to increase bond amounts is that there is a history of insufficient compensation on bond claims, requiring a general change in bond amounts.

Car dealers can have an impact on the rate of their bond though. By improving their credit score over time, showcasing their finances and assets, and working closely with their surety bond company, dealers can get lower rates every time they renew their bonds.

If you need more information regarding the increase in the amounts of New York car dealer bonds, call us at (877)-514-5146 to speak to one of our experts!

Rhode Island Dealers: Your Dealer Bonds Will Soon Expire
As we near the end of the year, it’s time for Rhode Island auto dealers to think about their license…
read more

Kansas Auto Dealer License and Bond Renewal Due By End of Year
Kansas auto dealers can expect to receive notifications regarding their license and bond renewal in the coming weeks. Both licenses…
read more

Florida Dealer Bonds for Franchised Dealers Expire on December 31
Florida franchised dealers will have their licenses and auto dealer bonds expire on December 31. While you can renew your…
read more
Get a FREE Surety Bond Quote in Minutes
GET A FREE BOND QUOTE
FREE Quotes | No Obligation | 100% Secure
Companies we work with:
About Lance Surety Bonds