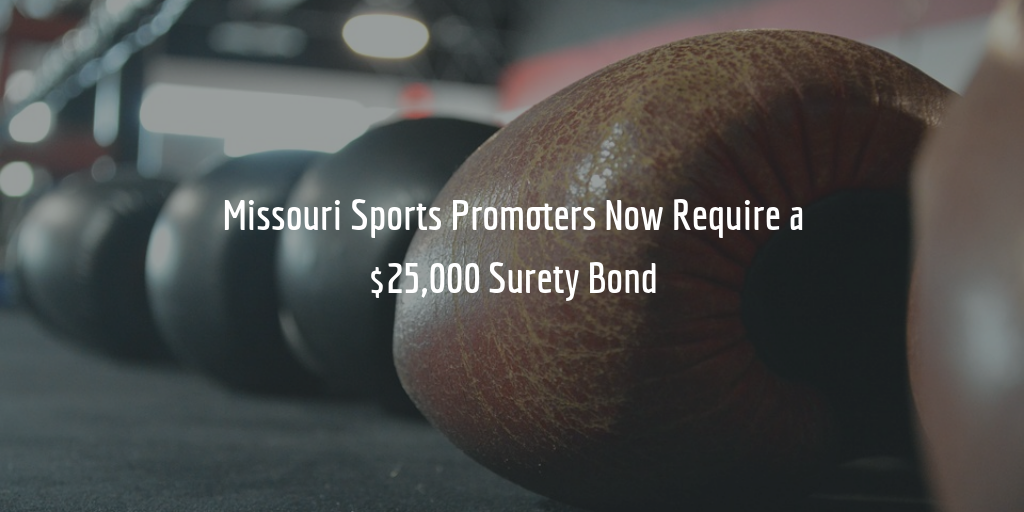 As a result of the increased bond amount, promoters will also need to pay a slightly higher bond cost when obtaining their bonds. Read about the new amount, and other important changes introduced by the bill below!

Missouri House Bill 1388 was signed into law on June 29, 2018. The bill repeals several sections of the Revised Statutes of Missouri (RSMo) and enacts nine new sections which concern sports contests in the state.

Several of these new sections which are located in Chapter 317 of the RSMo concern sports promoters in the state directly. Under the new law, amateur kickboxing, as well as amateur and professional mixed martial arts are now also regulated and supervised by the Missouri Division of Professional Registration, Office of Athletics. This includes issuing licenses for contestants in these categories, regulation of the contests themselves, fees for such licenses, etc.

The inclusion of these arts means that contests in these categories will need to have the approval of the Division prior to being promoted and organized. It also means that bout contracts that are signed between promoters and contestants will now also need to be signed with contestants in all of the above categories.

Moreover, prior to being issued a promoter’s license, applicants will now have to submit a $25,000 surety bond, rather than the $5,000 bond required previously. The bond is conditioned to provide coverage for any taxes and fees that are due to the Office of Athletics. The bond will also cover any expenses of contestants or officials should a promoter default on their obligations. The Office may also require applicants for a promoter license to post another bond if it is determined that the amount of the initial bond will not be sufficient to cover potential claims.

Finally, the bill also includes new rules regarding the use of elbow and knee strikes during amateur contests.

As of August 28, 2018, sports promoters in Missouri will need to comply with the new surety bond amount requirement. At that time, to remain licensed, current sports promoters in the state will need to have obtained a surety bond that increases their bond amount to $25,000. New applicants for a promoter license, on the other hand, will only be granted a license after submitting a bond in the required amount.

With the increase of the amount of sports promoter bonds in Missouri, the surety bond premium for promoters will also change. Of course, as with all bonds, the specific premium that needs to be paid by bond applicants is determined on a case-by-case basis.

Want to know how much your own bond will cost? Complete our bond application form and we will contact you with a free and exact cost on your bond as well as with further details about getting bonded.

Do you have any further questions about this bond? Call us at 877.514.5146 to speak to our professionals and learn more!

Ready to apply for your surety bond? Start with a FREE quote!
GET A FREE QUOTE!
The following two tabs change content below.

The basics of obtaining a medical marijuana bond in Colorado
Colorado made news this year by legalizing the use of marijuana for recreational purposes. Effective January 1st, anyone who is…
read more

A Step-by-Step Guide to Becoming a Licensed Contractor in Texas
Are you considering working as a contractor in the state of Texas? You will likely need to get a Texas…
read more
Get a FREE Surety Bond Quote in Minutes
GET A FREE BOND QUOTE
FREE Quotes | No Obligation | 100% Secure
Companies we work with:
About Lance Surety Bonds

A Step-by-Step Guide on How to Become a Freight Forwarder in 2021
To act as a trucking or road freight forwarder, you need to apply for Operating…

The Complete Florida Contractor License Guide [2021 Update]
If you want to start a construction business in Florida, you need to undergo an…