Washington Will Stop Issuing Wholesale Dealer Licenses as of July 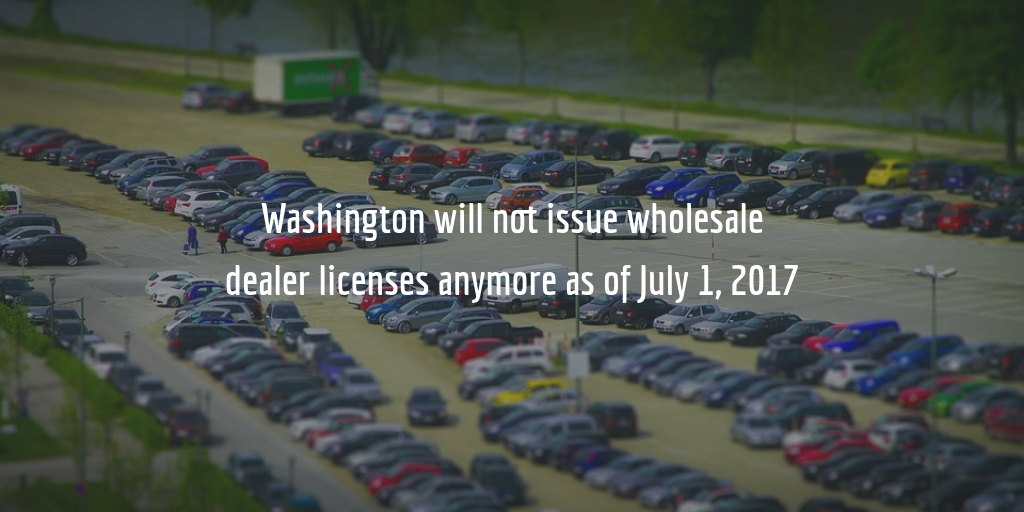 The new bill takes effect on July 1, 2017, when the DOL will stop issuing Washington wholesale dealer licenses. Further provisions of the bill will come into effect in 2018 and 2019.

For a full overview of the Bill’s provisions and what that means for current dealers, read on!

The DOL is currently still accepting license application. But with changes to the licensing process coming up soon, it has announced that wholesale licensing applications will not be accepted after May 15, 2017.

Why is the Washington wholesale dealer license being removed?

Numerous federal and state complaints have been issued that carriers of Washington wholesale dealer licenses have engaged in retail sales (something not allowed by that license), and in criminal activity.

As a result, the state has now decided to phase out these licenses over the next two years. The DOL has also found that there were no serious economic benefits from the issuance of these licenses and that it has been difficult to receive compensation under the bond agreement of these dealers.

So what are the provisions of the bill?

The bill also eliminates retail dealers’ right to institute action for recovery against a wholesale dealer’s bond if they have suffered damages or losses as a result of transacting with them. It remains to be seen whether this provision will cause difficulties or damages to any possible claimants.

What are your thoughts on the change?

While the bill was backed by state representatives, it was opposed by a private organization, which saw the move as limiting and harmful to dealers. What are your thoughts on the change? Leave us a comment below, we want to get your feedback!

Reminder: Dealer Bond Renewal in New Jersey is Soon Due
If you are an active auto dealer in New Jersey, it’s once again that time of the year when you…
read more

How to Get an Alabama Contractors License
Whether you’re a general contractor, a plumber, or an electrician, you need to get an…

How to Open a California Credit Services Organization [2023 Guide]
Do you want to launch a credit services organization in California? To start this business…

How to Get a Carpenter License
Carpenters take on a wide variety of roles across the construction industry. From removing walls…

How to Get a Plumbing License in Florida
Plumbers, like most tradespeople, are in high demand across the country, and Florida is no…